Fighting for a worthy cause has moved out of the streets and gone into the kitchen. Organically farmed food may come off for some as a fashionable fad, but its popularization first spread among those who fought against the use of synthetic fertilizers and pesticides, whether for issues concerning health or the environment.

Safe to say, the fight lives on and has made its way to Metro Manila. For the Filipino organic foodists out there, I know you have had too few options around the cityscape, so let me add one to your list.

The Farm Organics is an organically farmed food only kind of restaurant, with all sorts of great selections on their menu, from steaks to salads, drinks to desserts. Ingredients are directly sourced, and even for those that aren’t (like the boxes of branded tea bags they have on the counter), they make sure that what they serve you is organically produced.

It started out around 38 years ago in the cattle business, and it has led the industry in producing “clean” food. By around 2011, you could buy The Farm’s organic meats from select supermarkets around the Metro, and only April last year did they bring their goodies to the foodies, starting up this restaurant in Alabang Hills.

Not only is their food organic, but they offer up certain items on the menu that would cater to your special dieting needs. They offer a Vegan Mushroom Burger (230PHP) and even a Paleo Burger (180/130PHP). Generally, you could come in for something light at about 200-300PHP, but if you’re looking to have dinner, 400-700PHP per person should do the trick–unless you’re having steak, which is an entirely different story. 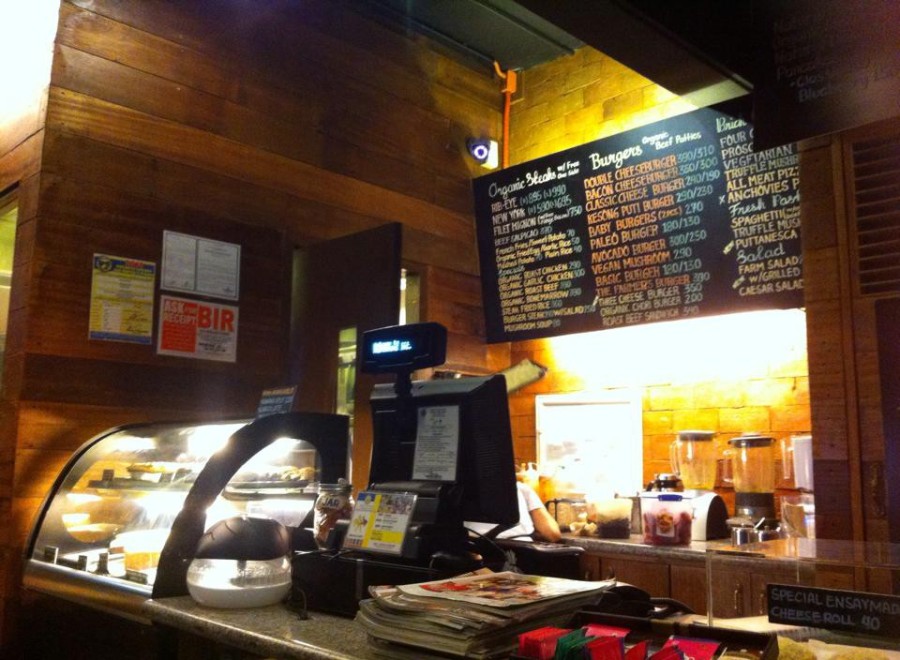 As a first look at the general ambiance of the scene, The Farm looks like a photo studio set in a log cabin. With all the metal coated black, off-black coal wall with the restaurant’s logo embedded into it, and the overhead grid of studio lights, the place brings a lot of stark modernity into a very warm and earthy wood-furnished style. The place is fairly sized, with about ten or so tables. The bit of colored chalk on the board pops out to bring a lively vibe to a very laid-back environment.

My boyfriend, the awesome-est ever JC Tamayo, a man of truly impeccable taste, found this place and very aggressively recommended to have dinner here. And by that, I mean, he absolutely made sure that our next dinner date would have to be at The Farm. (If you are from The Farm, and you’d like to acknowledge this review, you have to thank him via twitter @jctamayo17, because it was his idea.)

To start off with something light and fresh, their Farm Salad is an amazing marriage of bitter, sweet, tangy, savory, smooth and crunchy. All of the good things have come to one dish, and it even has a good cut of steak (though not that much; and I’m not really sure which cut of beef they used). The salad is a mix of romaine lettuce, arugula, feta cheese, and candied walnuts, drizzled generously with a mango dressing. The steak is served perfectly medium rare (unless you request otherwise), and compliments the dish well. It feels and tastes so fresh, that it has a hint of the meat’s own earthy sweetness to it like good fresh meat does, independently from the salad dressing. The steak does well not to overpower the rest of the salad, and makes the mango-and-walnut combo shine like real superstars. 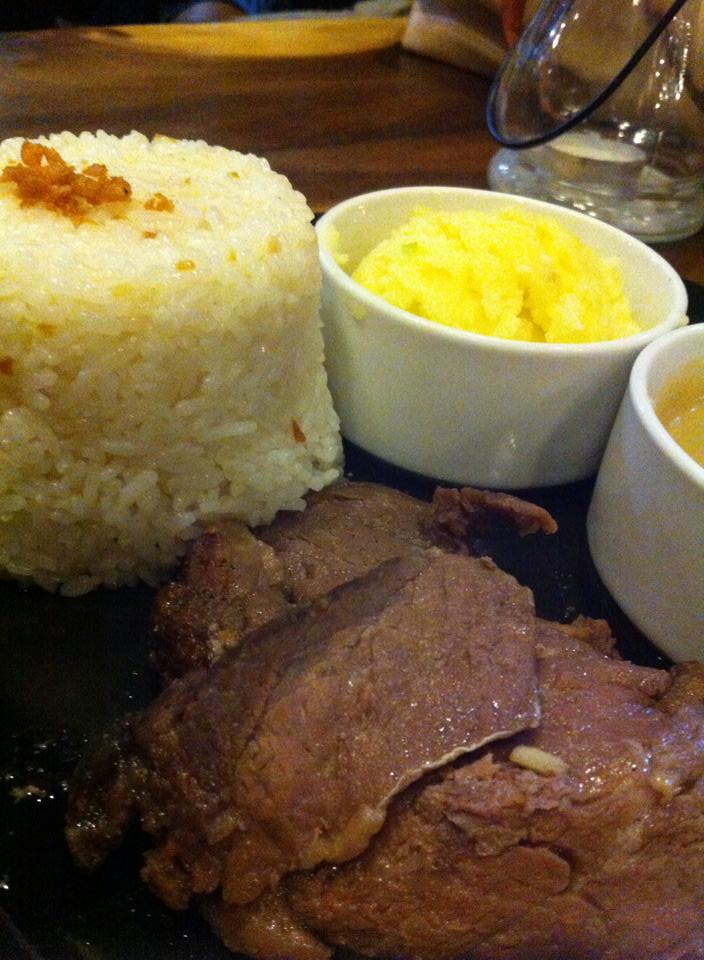 I have many qualms with this dish. Taste-wise, I don’t understand if their roast beef was trying to accomplish a Southern country kind of vibe, or if they’re trying to pull off a Filipino taste. It’s rather confusing, with very little direction. It isn’t very memorable either, only hints of garlic, and something unintentionally tangy in the marinade comes to mind. Which confuses me as to why they offer some sort of mushroom gravy (or was it soup?) on the side, because it just doesn’t pair up well. The gravy did taste pretty good, though, so instead, I just drowned the meat in gravy.

I don’t very well remember if they offered to give an alternative side dish to this meal, instead of mashed potatoes. But either way, it comes with garlic rice. To which, I make my second point: garlic rice does not taste good when it’s cold. In terms of service, the food takes a long while before it gets to the table, which is usually understandable, because they prep everything fresh off the order sheet. But when food comes to you cold, that’s just not leisurely dining–that’s leisurely serving.

It is difficult to enjoy good flavors when it’s not in the right temperature. And as always, good food isn’t only judged by its taste. It is under scrutiny for its presentation, its texture, creativity in execution, but also temperature. Temperature is very, very important.

I was really disappointed with this dish, so I won’t score it on an over-five basis; I’ll just leave it be. Just know that it failed me gravely.

When I ordered fries, my line of thought was like this: Oh, the menu is big on steaks, so prolly like southern cooking kind of thing. Hm, I’m thinking thick cut fries with the skin still on, and it’s prolly baked too.

But it isn’t. They’re beautiful, and crisp, and golden. Well-seasoned, but doesn’t mask the nutty, meaty flavor of potatoes. Like Luther said, “Nothing gratuitous, nothing unnecessary.” Crunchy to bite, but delicate to chew. Just very well-balanced.

Some Berry Crush Drink in a Hipster’s Mason Jar

The ice was clumped and too thick, and you couldn’t drink it through the straw. I loved the taste, over-all, as the sweetness doesn’t overpower the naturally sharp tanginess of the berries. There are bits of berries that you could even bite. However, with the density of the drink, it becomes more like a shaved ice dessert, rather than a beverage.

That’s right, an organic-everything chocolate mousse. Hard to imagine that such a sinful delight could ever be part of anything helping the earth. But I’m sure that it’s helping to keep this review positive. The top is light and creamy, with the sweetness just-so. The ganache-like layer is rich, and melts in your mouth. The last layer of chocolate is dense and moist, tying together the taste of one bite in deep, chocolate euphoria. This dish gets a 4/5.

Overall, the food tasted amazing. Most of it, anyway. The service was very slow, and an order of fries took forever. Being the first branch The Farm has, and being a small one at that, we could understand if they have a staff-to-customer ratio issue. It’s pretty common. But the customer service problem is something they’ll have to improve on. And I hope to see better from them the next time I come around, because I’m pretty sure I will. The food is good enough to come back for, and I’d love to try out their burgers and pizzas soon. Maybe then, I’ll change my mind. But for now, The Farm Organics in Alabang Hills receives a 3.5/5 from me. Almost a 4, but not quite so.

If you’d like to check out The Farm for yourself, you could visit them at this address: The Farm Resto, One Legacy Place, Don Jesus Blvd., Alabang Hills, Muntinlupa City.

You could learn more about the restaurant and their organic meat via their official website, or their Facebook page.

Chaos in an organized form...

A blog about pens, paper and ink.

For Pain and Pleasure

writing well without spending a lot

For the love of pens, paper, office supplies and a beautiful place to work

join me in book thievering, stolen moments and refusing to grow up

Travel, Art, and Culture in Italy and the Wider World